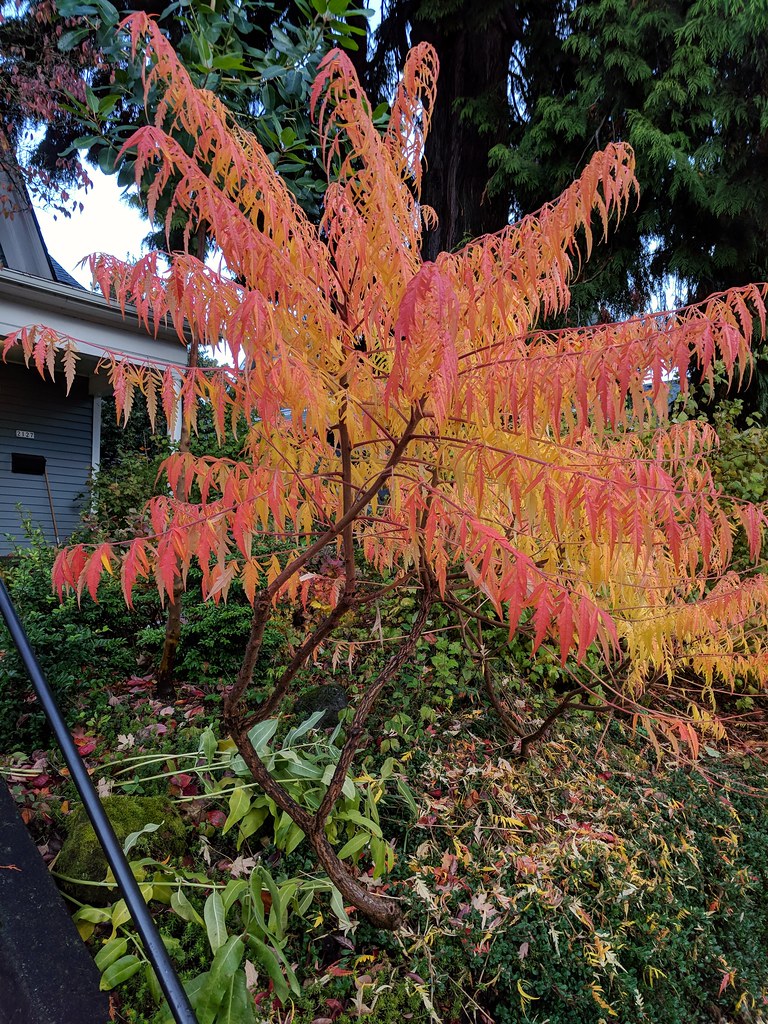 I've got a good one for you this month! It's less focused than usual, but there are three key topics, plus a mix of a few others:
First, if you're about to delete this unread, please take this survey (which takes <1 minute) to let me know if you have input on how these summaries could be more useful: https://www.surveymonkey.com/r/BCVDKQR . Thanks to all who responded; results are summarized at the end of this email.

Second, the long-awaited "Natural Climate Solutions" paper from TNC is out. Read it: it's only 5 pages and will be highly relevant to virtually everyone working in conservation. It makes a solid case for how immediately investing in nature to reduce GHGs can buy us much-needed time to bring down emissions and invent new technology.

Third, a new book came out Oct 12: Effective Conservation Science: Data Not Dogma. It includes chapters from myself and several TNC authors, and is full of fascinating stories of how we react to science that counters conventional wisdom. I also share related articles below on how we can work through our biases.

CLIMATE CHANGE / NATURAL CLIMATE SOLUTIONS
Griscom et al 2017 (the natural climate solutions paper) packs a lot of good content in, but two things in particular excite me. First is making the case for massive rapid investment in nature: while we develop new tech and bring down emissions, we can use proven solutions like trees to buy time and make progress (see figure 2: nature could get us 37% of mitigation needs by 2030 at <$100/t CO2e / yr). We need the tech too, but nature is something that works today to bring down GHGs. Second is breaking down their top 20 options for nature-based climate mitigation into the theoretical maximum impact (about 1/2 of which would cost <$100 / t CO2e / yr), what we would need to hit Paris targets of <2 degrees C, and the subset of mitigation which is cheap (<$10/t CO2e / yr). See Figure 1 for this breakdown, which highlights that forests are absolutely critical (2/3 of cost-effective mitigation), and that the biggest opportunities for cheap mitigation are preventing forest loss (and improving forest management), improving fertilizer use on farms, and keeping peatlands intact. The forest goals rely heavily on a small reduction in grazing lands (4%). I'm leaving out lots of important details to keep this short: just read the paper. It's worth it. Read all about it (or watch videos) at https://global.nature.org/initiatives/natural-climate-solutions/natures-make-or-break-potential-for-climate-change

DATA NOT DOGMA:
The book Effective Conservation Science: Data Not Dogma tells stories of scientists whose unconventional and inconvenient results challenge us all to broaden our thinking and consider how we respond to new information that undermines what we think we know. My chapter is around how my analysis and blog post showing that globally agriculture has been taking up a smaller footprint since 1998. You can buy the book here: https://global.oup.com/academic/product/effective-conservation-science-9780198808985?cc=se&lang=en& and read a review of one chapter here: www.slate.com/articles/technology/future_tense/2017/08/conservation_biologists_are_struggling_to_balance_science_and_advocacy.html and read an ugly (unformatted) version of my chapter here: http://fish.freeshell.org/publications/DataNotDogma-Chapter11-preformatted.pdf

Here are three more papers on the topic of scientific bias:
In 1992 E.O. Wilson asserted that invasive species were the second greatest driver of species extinction (second only to habitat destruction). He did so without providing evidence or details behind his calculations, but this claim was rapidly repeated and taken as gospel by environmental scientists. In fact, TNC played a major role in elevating Wilson's claim by not only citing it (in a BioScience paper and related book), but adding that "scientists generally agree" with Wilson's claim (again without evidence). Chew 2015 tells the captivating story about how this happened, using clear writing, thought-provoking questions, and numerous examples of bias in language that should be neutral and scientific. He also tells us how the idea eventually became subject to critique. I have seen this phenomenon firsthand; I follow a trail of citation breadcrumbs from authors to discover a primary source with an assertion that cannot be supported by what's in the paper (e.g. a book chapter on soil by Rattan Lal). When scientists don't closely read the papers we cite (or read them at all), our biases blossom and spread. If you're interested in invasive species or how spurious claims spread, this is a great read (albeit long).

Warren et al 2017 asks how common it is for scientists to be biased with regard to invasive species: using value-laden language and favoring interpretation that emphasizes the impacts of invasive species even when the data are not clear (as exemplified by the Chew 2015 article). They found bias to be common, but also that it has been declining since a series of papers in 2004-2005 that argued against language vilifying invasive species. This paper is fairly simplistic but gets at a key nuance: even a bias which is generally true is counter-productive in science. This paper shows hope that with awareness of bias, we can make efforts to at least reduce the expression of that bias in our work.

Holman et al 2015 provides more evidence of scientific bias, and argues for the use of "blinding" when conducting research to limit the potential for bias to affect study results. This means scientists collecting data don't know whether the subjects or area they're observing is a treatment or a control. This makes it harder for preconceptions to affect measurements (whether subjective, or even "rounding" seemingly objective metrics to fit bias), and they present evidence that nonblind studies often inflate the effect of the actions being studied. If "working blind" sounds extreme to you, read my blog post about "Clever Hans" - a horse who was believed to be able to do math (but in fact was only skilled at reading when his audience believed he had the right answer): https://blog.nature.org/science/2015/02/12/horses-doing-math-clever-hans-lessons-conservation-science/

As a final thought on bias, check out the Minasny & McBratney article in the Soil section below, which challenges a key assertion for TNC's agriculture work (that boosting soil organic matter improves water holding capacity). Read the summary below, and observe your feelings and reaction if it challenges what you believe.

SOIL
Minasny & McBratney 2017 use a meta-analysis to argue against something generally believed to be true by people working on sustainable agriculture: they provide evidence that increasing soil organic matter has a relatively small effect on water holding capacity (particularly for plant-available water content). If they're right, it reduces TNC's argument that improving soil health via boosting organic matter on farms will substantially improve crop resilience to drought. The authors note that soils that benefit most from increases in organic matter are sandy and very low in organic matter to begin (both of which make sense). They have a good discussion of limitations of their analysis, in particular the fact that they focused only on soil and not what's above it. Cover crops and crop residue / stubble are likely to add to the small benefits shown via soil. There is also a lot of nuance and potential to reframe their analysis in a way that could show larger benefits. At the same time, recognizing that most of us have a bias on this topic, this is a useful reminder to check our assumptions about both the efficacy of practices and the key mode of action and metrics that we should focus on. The authors led a key paper on the "4 per mille" initiative on boosting soil carbon, so are not hostile to the notion of boosting soil carbon. You can read a news article about this one here: https://phys.org/news/2017-10-adding-soil-limited-effect-capacity.html

GENERAL ECOLOGY / BIODIVERSITY
Remember as a kid how many bugs would get splattered on the windshield of your car? Ever notice there are less now? A recent study (Hallman et al 2017) indicates this is a real phenomenon, with dramatic declines in flying insects. The authors tracked the total biomass of insects at 63 locations within nature preserves in Germany; from 1989 to 2016 biomass plummeted by 76%. They sampled several habitat types and found consistent declines. It's alarming to see this within protected areas, although the authors note virtually all are surrounded by agriculture. That could both pull insects away from natural areas, and provide more pesticide drift into the natural areas. Other studies have shown major insect declines, but none this severe, and I don't know of others within protected areas.
You can read a good summary here: https://www.washingtonpost.com/amphtml/news/speaking-of-science/wp/2017/10/18/this-is-very-alarming-flying-insects-vanish-from-nature-preserves/

SCIENCE COMMUNICATIONS
I've been pondering what we think we know and how to communicate thorny issues (as per data not dogma). I'd recommend a book I'm reading: "Do I make myself clear?" by Harold Evans, which is helping me. While not for scientists, I saw my writing sins laid bare in this book. I'm looking to simplify my writing in science papers, and to better talk about science in general. I have a long way to go! I'm working on summarizing key lessons amidst all of the stories in the book. One useful tool is the Hemingway app, which helps you identify problematic text and how to improve it: http://www.hemingwayapp.com/

AGRICULTURE:
As noted in my August 2017 review, neonicotinoids (neonics for short) are a class of insecticide currently under close scrutiny for impacts on bees. Mitchell et al 2017 found neonics in 75% of the 198 honey samples they tested, although mostly at very low levels. All neonics were at safe levels for humans, and most were at levels considered safe for bees. This is useful to show both that these pesticides are very common, that they are being consumed by bees, and that they often occur in concert with other neonics (all of which is concerning). But the reporting (and fundraising) around this has glossed over the very low levels. While 48% of samples had total neonic levels over a very conservative threshold for potential harm to bees (0.1 ng / g, a more reasonable (still likely conservative, albeit arbitrary) threshold of 2 ng / g was only detected in 8% of samples. The honey was collected via "citizen science"; the researchers asked colleagues, friends, and family to bring them honey produced in a known location. That also raises the question of whether or not these honey samples are typical.

RESULTS FROM SURVEY ABOUT THESE SUMMARIES:
I'm guessing the folks who didn't respond would have had more critical feedback, but overall here's what I learned from the ~40 respondents:
Some opportunities to improve I'll be mulling over:
REFERENCES:
Chew, M. K. (2015). Ecologists, Environmentalists, Experts, and the Invasion of the “Second Greatest Threat.” International Review of Environmental History, 1, 7–41. Retrieved from http://www.academia.edu/14884830/Ecologists_Environmentalists_Experts_and_the_Invasion_of_the_Second_Greatest_Threat