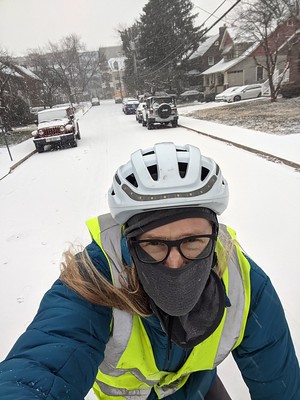 I've got a mix of papers this month but most relate to climate change (priorities for mitigation and adaptation, impacts on flooding, and how to plan for it) plus a couple of wildlife movement.

If you know someone who wants to sign up to receive these summaries, they can do so at http://bit.ly/sciencejon (no need to email me).

CONSERVATION PRIORITIES / 30x30 / CLIMATE ADAPTATION:
Dreiss & Malcom 2022 is an analysis of priorities for protection under 30x30, considering hotspots of biodiversity and carbon, current protection (Fig 2), and threats. The two threats are risk of conversion (to non-habitat by 2050) and climate vulnerability (need for habitat / species to migrate elsewhere to survive, expressed in km/yr). They have two sets of hotspots, one with the top 10% of biodiversity (they calculated both imperiled species richness, and imperiled species range-size-rarity which captures how much habitat rare spp. have left), and one with the top 10% of carbon pools (not actual GHG mitigation potential, as it omits deep carbon like peat, other GHGs, and the albedo effect). Fig 3 has maps of their main results, but they're easier to see and explore in the interactive map at https://arcg.is/0SjGLK. Fig 4 highlights high conversion risk (>50%) and climate vulnerability for hotspots (top 10%) of biodiversity and carbon (4a = conversion & richness, 4b = conversion & carbon, 4c = climate vuln. & richness, 4d = climate vuln. & carbon). Upgrading all existing less strict protected areas (GAP 3) would achieve ~30% protection, but that would miss 80% of biodiversity hotspots (which are on private land). Similarly, 21% of unprotected biodiversity hotspots have at least a 50% chance of being converted by 2050. The authors didn't include political, social, or economic considerations, but there are still a lot of useful data in here.

Dreiss et al. 2022 identifies priority conservation locations within the contiguous US to support climate adaptation (via refugia and corridors). Fig 4c shows which climate refugia and corridors are unprotected (in gray) or underprotected (GAP 3 in orange). The bottom two rows in Table 3 shows that the best places for climate adaptation mostly don't overlap with the best places for biodiversity or carbon (~20-25% do). This means that focusing solely on biodiversity or carbon hotpsots is likely to miss critical refugia and corridors to help ensure resilience to climate change.


CLIMATE CHANGE IMPACTS:
Wing et al. 2022 modeled increasing US flooding risks due to both climate change (by 2050 under RCP4.5, which is 'medium' emissions but still means aggressive decarbonization) and changing populations. Note that the paper uses 'risk' in the engineering sense: likelihood of impact times magnitude of impact (so risk is reported as expected annual $ losses due to floods). Those losses are expected to go up 26% just from climate change (calculated at the building level based on current population data), but considering both climate change and population change they predict almost twice as many people will be impacted by flood each year (with that impact driven largely by population growth). The highest current flood risk is in predominantly white and extremely poor counties (partly b/c very poor people in areas at risk of floods have few financial assets not vulnerable to floods, so their relative risk is higher). The counties with the highest % Black population are expected to see twice as much risk increase by 2050 as counties with the fewest Black people. This is due a mix of increasing flooding risk in the Deep South, and the relatively low current risk of mostly Black counties. You can read more about this at https://www.washingtonpost.com/business/2022/01/31/climate-change-flooding-united-states/

Brown et al. 2022 has a good overview of recent improvements to incorporating climate change into conservation planning via the Conservation Standards (aka Open Standards for the Practice of Conservation). If you're not familiar with the Standards, this paper will be a bit overwhelming, but still has useful tidbits. Jump to figure 4 for a very helpful diagram of physical changes expected to result from climate change, and which of these changes make sense to classify as "direct climate threats" (in red text). What I love about this is it helps you move past (climate change will affect everything) and identify the specific changes that a) will affect focal species and ecosystems, and b) which you can affect via conservation. So rather than focusing on changes to rain, they identify decreased water availability and increased risk of landslides as climate threats. Then Fig 5b shows how the climate threats are integrated w/ other direct threats and linked to conservation targets (the species and ecosystems being prioritized for action). If you can handle switching examples, Figs 6 and 7 show how to move from a situation model (linking threats to targets and identifying possible strategies) to a results chain (showing the desired interim results and ultimate impacts of a strategy). There is some updated guidance available since this was published on the CMP web site.


WILDLIFE MOVEMENT / MIGRATION:
Merkle et al. 2022 addresses the problem that species which favor returning to fixed places to forage / breed / shelter have a hard time adjusting to habitat loss and resulting fragmentation. Figure 2 has a good example: mule deer in WY staying true to winter range despite oil & gas development, which the authors give as an example of an 'ecological trap' due to 'site fidelity' (they keep coming back even if they have better alternatives). They call for more research on what drives site fidelity (genetics, environmental conditions, or a mix), and for conservation plans to account for site fidelity rather than assuming animals will choose the best habitat possible.

Vynne et al. 2022 is a global analysis to find terrestrial ecoregions where only 1-3 large mammals (>33 lb, 298 species) are missing from the mammals that present 500 years ago (Fig 2 has a map of those results). Given the impact large mammals have on ecosystems, the idea is that getting back to the full suite of mammals that used to be there will have broader effects. But this is an assumption the authors make, rather than a conclusion of the analysis (most news headlines have implied the latter). The best known example of that is the impact of reintroducing wolves to Yellowstone leading to a trophic cascade (although unfortunately those effects have been widely exaggerated due to non-random aspen sampling and failing to account for confounding effects of human hunting and changes in streamflow due to climate). Their 30 priority ecoregions for reintroduction / restoration are in Table 2 and Figure S3. They note the challenges in reintroducing predators in particular, including the need to plan to avoid human conflict and difficulty of securing protection over large areas to allow for connectivity).

p.s. If you'd like to keep track of what I write as well as what I read, I always link to both my informal blog posts and my formal publications (plus these summaries) at http://sciencejon.blogspot.com/
p.p.s. As shown in the pic above - I am a committed winter biker, and my wife and I very much enjoyed Arlington's winter bike games recently!