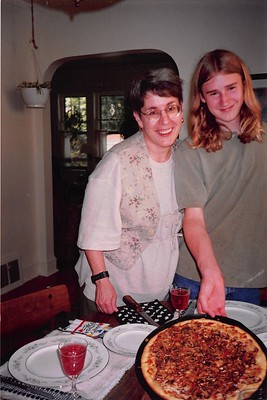 I wanted to begin this summary by acknowledging the loss of a very important person in my life. Carol Gaetjens was my biological mom's partner who played a big role in raising me (Carol was my "co-mom" or my "other mom"). She recently died suddenly and unexpectedly, and her passing leaves a big hole in my heart. Here's her obituary for those who are interested.

Among the many things she taught me was to rethink my assumptions age and the elderly (through her work as a gerontologist). So I wanted to include an article she wrote about the perceptions of gerontology students on age diversity in the classroom in this month's summary.

I also wanted to thank her for more recently inspiring me to write a much shorter version of my last research article. When I sent her the full paper, she said she loved it, but wanted "a short version that I could pass out to my students that they'd actually read. You know, get to the good stuff without all that academic citation bullshit!" That kind of enthusiasm paired with clear and useful feedback was a hallmark of Carol's. When I sent her a draft of the short version, she liked it, but also griped about all of the other stuff in the full article she missed, before we concluded that maybe there was no perfect length of a summary.

I've also got a couple more articles about protected areas that people sent me in response to the March science summary I sent.


GERONTOLOGY:
Gaetjens 1997 is a really interesting read about how gerontology students think about the value of age diversity in their programs. Unlike virtually any other program, in gerontology students vary widely in age (in Carol's sample from Northeastern University where she taught, students in the program ranged from 23 to 77. The paper is a pretty quick and easy read (let me know if you want a copy), but in short it covers their attitudes about the age diversity in the program, and if / how age should be used as a criteria for being accepted into the program and/or for financial aid. She found that most students spoke very positively about the value of age diversity, but a few middle aged and older students thought that people younger than 25 or 30 might not be mature enough to study aging, and that people over 70 may have cognitive issues that would frustrate them. She concluded that gerontology faculty had a key role to play in helping their students identify their ageist beliefs, and to work on reducing their bias through their studies.


PROTECTED AREAS:
Wolf et al. 2021 looks at how well protected areas (PAs) are reducing deforestation (compared to unprotected areas). Some PAs are in places where deforestation isn't happening regardless of protection, and other PAs are losing forests despite protection; neither kind helps conservation much (although the former may be useful if deforestation patterns shift and those PAs are enforced). They found PAs lost 41% less tree cover than similar unprotected areas. I'm not convinced that is an accurate number, but the important thing is that they found PAs are slowing deforestation but still losing a lot of trees. This shows the limits of a quantitative goal like 30 by 30 if it doesn't include a qualitative aspect including efficacy. PAs lost more tree cover when they were large and/or in regions with more deforestation overall. Fig 5 highlights countries with the most forest vertebrate species and the lowest forest protection. Note that this study looks at 'tree cover loss' rather than deforestation as land use change; some of the lost trees may be due to natural events or sustainable timber harvest that will allow the forest to regrow (as opposed to being permanently changed from forest to non-forest). This is important as tree cover loss in protected areas in countries like the U.S. is usually legal since some types of protection allow for timber harvest or other extractive uses.

Mogg et al. 2021 (a preprint, not yet peer reviewed) is an interesting global analysis of what protected areas (PAs) would be needed to minimize extinction risk of land mammals (by ensuring all species have 80% of their range protected and other IUCN Red List criteria). Unsurprisingly they find we would need a lot more protection: 60% of all land outside Antarctica, and >70% in Oceania and South America would have to be protected. But this analysis is solely driven by the needs of wildlife, and ignores the projected human need for food and livelihoods. In fact, they focus on areas suitable for agriculture (given the higher conversion threat) which makes it likely their recommended scenario would be unable to keep up with human demand for food. They also ignore capacity and resources needed for enforcement, which is already an issue, and would be much harder with a rapid expansion of PAs focusing on areas currently being converted. As a result, I imagine this analysis is non-convincing to anyone who isn't already strongly supportive of conservation as a top priority.


ECOLOGY:
Bergstrom et al. 2021 assesses 19 ecosystems in Australia (2 fresh, 4 marine, 13 terrestrial), finding that all either have collapsed or are collapsing (on at least a local scale). Their definition of collapse is pretty broad: a documented transition to a new ecosystem state over >10 years, along with any substantial changes in: population size or keystone or characteristic species, ecosystem biomass, ecosystem engineers, or ecosystem services / functions (they consider the latter to be evidence that recovery is unlikely). They offer detailed information about each ecosystem in the supplement, and note that for collapsed ecosystems, the only options are accept the collapse, "renovate" the ecosystem to intentionally modify some elements to allow recovery, or "adapt" to a novel or highly modified ecosystem.

Provencher et al. 2020 makes a case that in prioritizing where to focus conservation effort, we should consider "biodiversity potential." This is partly about ecosystem condition or how many species are present relative to their potential maximum number of species, partly about threats that reduce that maximum potential, and partly about irreplaceability of the species and systems present. They use greasewood shrublands which live on salty soils as a case study; overall species richness is low but they still serve important functions. They note that groundwater withdrawals are a key threat that reduces the biodiversity potential of greasewood ecosystems, and call for more work on these and other undervalued ecosystems.

p.s. for my American readers, nothing in this summary is an April Fools' Joke. I don't mess around when it comes to science.