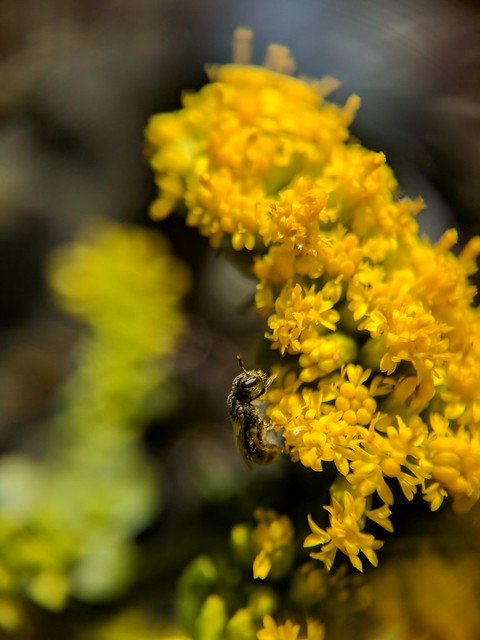 My garden is abuzz with bees and flies (the photo above is of a bee the size of a gnat), which has me thinking about pollinators and pesticides - the focus of this roundup. But I couldn't resist including one study on improving watershed-scale water quality via changing agriculture, as I've been gushing about it for years (hat tip to Steve Richter from TNC Wisconsin). Enjoy!

If you want to receive these monthly summaries by email you can sign up at http://eepurl.com/diB0nr, and if you want an email anytime I post something on this blog you can subscribe using the form on the top right of this page.

AGRICULTURE & WATER QUALITY:
Carvin et al 2018 is a study I've been eagerly awaiting for years. It is a rigorous paired watershed study looking at the impact of a carefully targeted set of agricultural interventions, and is one of the first papers in the US to show we CAN improve water quality at a watershed scale (50 km2) through shifting ag. Initial work had found 9% of the area was contributing 40% of the phosphorous load, so the authors really targeted those heavy contributors. They found a 55% reduction in phosphorus runoff loads and suspended sediment event loads decreased by 52% for events during unfrozen soil conditions  into the Pecatonica River tributary during storm events. This is big news as these outcomes have been elusive. However, this watershed was picked as one of the most likely to respond well, and those seeking to replicate these results should also carefully select their watersheds. Contact Steve Richter at TNC for more info.


POLLINATORS:
Klein et al. 2007 is a fantastic reference examining dependence on animal pollination across 115 major crop species (ignoring crops like corn which are entirely wind-pollinated). I mainly use Appendix 2, which for each crop lists how much it benefits from animal pollination (from entirely dependent on animal pollinators like cocoa or squash, to receiving almost no benefit) as well as listing the type of pollinator, pointing to references, etc. While the appendix is my favorite part, they also note in the main paper that a) non-insect pollinators (e.g. birds and bats) are less well studied and b) as agriculture intensifies wild pollinators are likely to decline. This means thinking about pollinator habitat in and around farms can be important for some crops, and the appendix can identify which ones are most likely to see more benefit.

Garibaldi et al 2016 argue that improving pollination is an underappreciated need to close crop yield gaps. They found that yields on small farms (<2 ha) could be improved by 24% on average by boosting pollinator density. Strangely for larger farms, when polinator diversity was low, yields actually dropped with incresing pollinator density (when diversity was high, yields went up with pollinator density as expected). The authors don't explain why (or even accurately convey that finding in the text), which makes me wonder if the sample was too small. They did find that isolation from natural habitats was one of the most important predictors of crop yield. This calls attention to the need for more specific data on how restoring habitat could boost crop yields (including testing crops and regions likely to receive the most benefit).

I recently wondered if camera traps and audio monitoring would work for pollinators, and Edwards et al. 2015 had a crafty idea that worked well: long-term time lapse video. They looked at visits by pollinators to 30 different plant species, then focus on a species of dogwood and had nearly complete records for a given flower. Check out Figure 1 and 2, you can clearly not only see the rough type of pollinator, but even see pollination take place as florets within the inflorescence close (a cluster of flowers, for a dogwood this looks like 1 "flower"). The system is relatively cheap and simple, and perhaps the biggest obstacle to doing lots of this is the need to manually review each video to classify pollinators seen in each frame (an hour of footage plays in 1.75 minutes, but scoring takes longer). There's also a question of how many flowers of how many species you'd need to monitoring to get a sense of total pollinator activity on a given piece of land. Still a really cool setup worth keeping an eye on.

I was recently surprised to hear that soybean can benefit from insect pollination (despite self-pollinating). Milfont et al. 2013 demonstrates this under field conditions (including typical pesticide application) in Brazil. They found wild pollinators may boost soy yields by 6%, and adding honeybees on top of wild pollinators raised yields 18%. They either caged plants to prevent access by pollinators, left them open (and did sampling for pollinators), or added honeybees nearby (without caging the bees to force pollination). The exciting thing is if even intense industrial soy gets a 6% boost, there is potential for soy with more careful pesticide application and more integrated pollinator habitat to do considerably better.

Gill and O'Neal 2015 also looks at insect pollination of soy, but focusing on the pollinators in Iowa rather than crop yield. They did lots of sampling, collecting >5,000 individuals from >50 species. 29-38% of the bees they sampled had collected at least some soy pollen. Strangely, although honeybee colonies were present on or near the farms they studied, they found almost no honeybees in their traps. This again emphasizes the potential value of wild pollinators. As an aside: the most common species of pollinator they found is one of the coolest kinds of bees I've ever seen (Agapostemon virescens, see the photo at the end of this email).


PESTICIDES / PEST CONTROL:
Eng et al 2017 provides the first experimental evidence that ingesting neonicotinoids (imidacloprid) and organophosphates (chlorpyrifos) can directly harm songbirds. Birds were fed low doses (the amount typically found on <0.1 corn seed, ~4 canola seeds) or high doses (0.2 corn seed, or 9 canola seeds) and lost 17-25% of their weight within 3 days of being dosed (for imidacloprid only) and were unable to sense north (which could impair migration), although they recovered within 14 days. This is concerning as birds may eat spilled treated seed (or even granules of the pesticide directly), which could lead to reduced breeding success. On the other hand, for some seeds birds typically remove seed hulls before eating the seed, which would reduce the effective dose. You can read a newspaper article about it here: https://amp.theguardian.com/environment/2017/nov/29/common-pesticide-can-make-migrating-birds-lose-their-way-research-shows and read the paper here: https://www.nature.com/articles/s41598-017-15446-x.epdf?author_access_token=60vOAq7fy3uoItENRL_WLtRgN0jAjWel9jnR3ZoTv0PBos7CYdu4-aOFIzRGcQZYPhLZT79bnumB3G0JwKQDqd8sXxokuXX20RybZGim1WNULIibibaVSnXR6616CbBcOjFXccxNhEZR_Q54lKeJqg%3D%3D

Tooker et al 2017 tackles a hot topic - what role do neonicotinoid seed treatments (NST) have in integrated pest management? Many ag companies assert they fit in well, since they can reduce aerial sprays which would have higher impact. On the other hand, there are concerns about effects on nontarget species, potential for resistance, and universal prophylactic application as opposed to the usual IPM approach of deploying pesticides in response to a pest outbreak. They have some interesting findings. First, they find that NST mostly target relatively uncommon pests by using almost universal application more suited to severe pests. They also note that current use of NST on corn and soy is much higher than historic benchmarks, indicating NST is not simply displacing other pesticides. They conclude by noting that more careful use of neonics is likely to both retain their value for pest control longer (by slowing down resistance), and that the challenge in finding corn and soy seeds without NST should be addressed.

Lechenet et al. 2017 looks at almost 1,000 farms in France, comparing farms with similar context to look at how the frequency of pesticide application relates to yield. They estimated that 3/4 of farms could reduce pesticide use without reducing yield or profit, and that on average for farms where they could get more specific, pesticide could be reduced on average by 42%. It's important to note they looked at correlations and predictions rather than empirically testing interventions, and they note that these reductions would likely be challenging for farmers.  Nonetheless, the article shows the importance of evaluating pest control strategies and looking for ways to reduce pesticide use.

I don't totally buy all of the conclusions of Bøhn and Lövei 2017, but they present some pretty interesting case studies. The basic theme is that a simple reductionist approach to pest control via GM-traits is unlikely to solve complex pest problems. They come out arguing that pesticides and transgenic traits are unlikely to be successful but also don't present clear alternatives. To me the interesting part of the paper is looking at the set of responses to a new transgenic plant (especially the surprises), and using that to think about what was missing and how we could build more robust pest control systems with more forethought and better design.

Bueno et al. 2017 is a primer on integrated pest management (IPM) for soybeans in Brazil. They list key pests, provide recommendations for scouting / sampling methods, evaluate several control methods (viruses, natural predators / parasitoids, insecticides, etc.). They also address how different pesticides impact natural enemies, finding that thiamethoxam harms natural enemies enough to actually allow pests to increase (although this is based on unpublished data, and appearing in a fairly low-quality journal, so it's an interesting thing to look into rather than a solid result). I see this article as a useful set of issues to consider for people working in this space.

p.s. as a reminder, you can search all of the science articles written by TNC staff (that we know of) here http://www.conservationgateway.org/ConservationPlanning/ToolsData/sitepages/article-list.aspx
(as you publish please email science_pubs@tnc.org to help keep this resource current).
If you'd like to keep track of what I write as well as what I read, I always link to both my informal blog posts and my formal publications (plus these summaries) at http://sciencejon.blogspot.com/

Bonus photo: here's the type of bee Gill and O'Neal 2015 saw the most on soy fields in Iowa (Agapostemon, this one is on a dahlia in my garden): 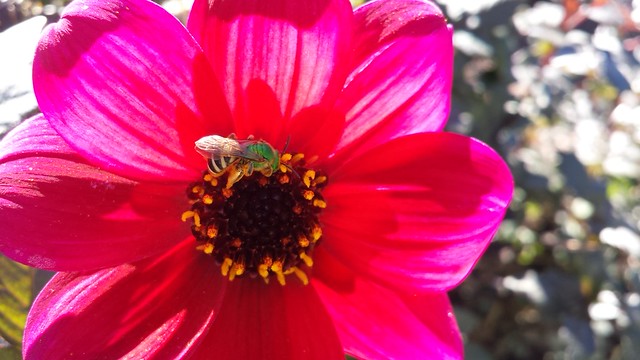