Data as Sand: Why Data Management is Relevant to Conservation

For a team meeting a while back, we were asked to record videos that explain what we do. Using grains of sand as a metaphor for pieces of digital information, I walk through how much "sand" we have in the world, and how my work helps people get relevant conservation information.

How Flying Undermines Your Green Lifestyle

How is it possible that a vegan, car-free, green living fanatic can have a bigger carbon footprint than the average American?  The original blog where I answered that question (on care2.com) expired after 5 years, so I've replicated the first half of it here using the always amazing Wayback Machine - the second half is lost to the ages.

How is it possible that a vegan, car-free, green living fanatic (that’s me) has a bigger carbon footprint than the average American? It’s pretty simple: for people who travel a lot—whether for work, pleasure or both—flying can outweigh everything else we do to live green.
Like many eco-minded people, sometimes I’m a bit self-righteous about green living and I get frustrated when friends and family seem to not “get it.” But recently I’ve been trying to objectively look at my overall environmental impact, and I’ve realized that some of the things I obsess over make less of a difference than the things I have given myself a “free pass” to do in the past—especially travel.
For example, a few years ago I attended a conference in Borneo (Indonesia) for work, learning about The Nature Conservancy’s projects there and conducting a few days of technical training for local staff. When I calculated the emissions for the flights for that trip, it had a total carbon footprint of 11.7 metric tons of CO2 equivalent(1), more than the total household energy use (electricity, gas, etc.) of the average American family for a whole year!(2) While I am hopeful that the purpose of the trip was worth the emissions, it’s still a pretty scary number.
Which led me to a disturbing realization: all of my efforts to shrink my carbon footprint—from eating vegan/organic/local foods to installing energy-efficient appliances in my home and commuting by bike—are quickly “wasted” if I fly often. Simply staying close to home can have a bigger impact than all those activities, at least in terms of carbon footprint.

Let’s take a look at this chart(3) comparing the carbon emissions of flight travel to various “green” activities to illustrate my point: 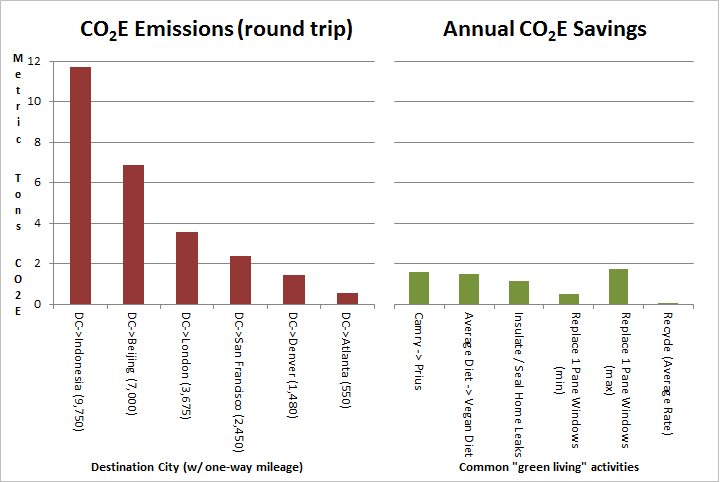 (more text)
Sources / footnotes:
1 Calculations of carbon footprint from http://carbonfund.org/offset/individuals . I used the actual flight pattern which included three layovers; a direct flight from DC to Balikpapan would have been slightly less (9.5 metric tons CO2E). Note that CO2E (or CO2 equivalent) indicates that factors including radiative forcing and other greenhouse gases like methane have been accounted for so that their actual impact is measured in how much pure CO¬2 would be emitted to have the same impact. For long distances, flying is typically more efficient than one person driving the same distance, but for simplicity only flight emissions are calculated here.
2 See the "home energy use" section on http://www.epa.gov/cleanenergy/energy‐resources/refs.html.
3 Chart calculations: As noted above, http://carbonfund.org/offset/individuals was used to calculate the CO2E, using actual flight patterns I have taken (including layovers where the cheapest flight from DC uses them), and including radiative forcing. The impact of switching from the average American diet to a vegan one (or from a "red meat" diet to the average one) was calculated in http://pge.uchicago.edu/workshop/documents/martin1.pdf. The average American diet gets 28% of calories from animal sources, of which 54% comes from meat (roughly 60% red meat and 40% chicken and fish). The "red meat" diet assumes 50% of calories from animal sources, all of which is red meat. The efficiency of the Camry (28 mpg combined, http://www.fueleconomy.gov/feg/bymodel/2012_Toyota_Camry.shtml) and Prius (50 mpg combined, http://www.fueleconomy.gov/feg/bymodel/2012_Toyota_Prius.shtml) were plugged into the vehicle emissions equation on http://www.epa.gov/cleanenergy/energy‐resources/refs.html to generate the projected annual emissions of each vehicle. The emissions savings from insulation and sealing drafts came from the EPA's estimate that homeowners can save up to 10% on total energy costs through such activities (http://www.energystar.gov/index.cfm?c=home_sealing.hm_improvement_methodology) combined with the EPA's estimates of average annual home energy use (see citation #2); the actual impact will vary substantially by home/region but I didn’t have data on the range of values in the U.S. The range of emissions savings from replacing single pane with energy star windows (shown as minimum and maximum values) came from http://www.energystar.gov/index.cfm?c=windows_doors.pr_benefits. Note that for windows a range of emissions is presented as it varies by region, and that if replacing double‐pane windows the savings are much lower. The emissions savings from recycling used the figures from http://www.popularmechanics.com/science/environment/recycling/4291576 to calculate the total amount of CO2 emissions avoided by recycling aluminum, glass, newsprint, and #1 plastics in the U.S. (other less commonly recycled materials were not considered). That figure was then divided by the 2010 population of the U.S. to get the average amount of CO2 emissions avoided by recycling per American.
4 How much water can you save by cutting back on animal products? Replacing a single hamburger with a soy burger saves 579 gallons (http://pge.uchicago.edu/workshop/documents/martin1.pdf), which has about the impact of using no water at home (not counting food/fiber, but including everything else) for over 8 days (based on daily usage from http://www.drinktap.org/consumerdnn/Home/WaterInformation/Conservation/WaterUseStatistics/tabid/85/Default.aspx)! Replacing a half gallon of cow's milk with soy milk saves 398 gallons or almost 6 days of water (555 gallons H20 per ½ gallon cow's milk vs 157 gallons H20 per ½ gallon soy milk).
5 See the "passenger vehicle" section of http://www.epa.gov/cleanenergy/energy‐resources/refs.html for the basic equation used to calculate emissions.
Posted by Jon at 11:08 AM No comments:

Not sure whether bamboo or organic cotton is better for the environment? Confused by all the competing claims about "green" clothing? I sure was before researching and writing this piece.
http://bit.ly/Ns2GDe

Want to green your office by making it easier to bike to work? Here are a few tips to get started:
http://bit.ly/R4yMo6

Are Solar Panels Worth It?

Are solar panels worth it? I look at commercial vs residential solar and compare solar thermal to solar photovoltaic.
http://bit.ly/OkLMDR

How Green Is Compostable Packaging?

How Green Is Compostable Packaging? I investigate whether or not they're actually compostable, how much energy they take to manufacture, etc.
http://t.co/9hN5MxOn

Why do Recycled Products Cost More?

Why do recycled products often cost more than products made from virgin materials?
http://www.nature.org/science-in-action/science-features/ask-the-conservationist-september-2011.xml

Tips for Greening your Commute

Looking for a quick introduction to green commuting?
http://bit.ly/NGYFWx