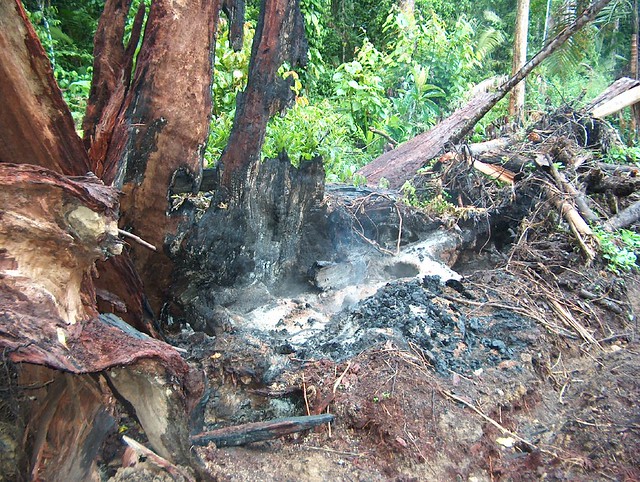 Most of this summary was written on a red-eye flight to China, so apologies if it makes even less sense than usual, and please let me know if you spot errors or omissions! There's some focus on habitat conversion, but I threw in two water quality papers, plus one each on grazing and soil C, and one on knowledge diffusion.

KNOWLEDGE DIFFUSION / INFORMATION SHARING:
There's another paper out from the study of how Conservation by Design (CbD) 2.0 spread through TNC and beyond. This paper (led by Yuta Masuda, I'm a co-author) focuses on "boundary spanners" - people with informal connections across departments / geography. These “boundary spanners” are four times more likely to spread information about “innovations” (here that means info about CbD 2.0) and to drive changes in attitude that encourage adoption. However, their advantage in spreading info only exists when they have <4 direct reports and are relatively low in the organizational hierarchy (counting levels of who reports to their direct reports etc. etc.). There's a blog with more info at: https://www.sciencedaily.com/releases/2018/04/180409090127.htm and you can read the paper at http://rdcu.be/Kre4


HABITAT CONVERSION:
Nevle & Bird 2008 is grim but fascinating. They find a connection between seemingly unrelated factors: global CO2 levels and pandemics among indigenous people in the Americas brought on by European contact. They link the population crash to a reduction in burning of forests for swidden agriculture, subsequent forest regrowth storing ~5-10 Gt carbon, and argue this is a likely contributor to a small measured reduction in global atmospheric CO2 at the same time. It's more of an interesting hypothesis with data which is consistent than real 'proof' but it's still a fascinating (if depressing) read.

OK, you know food choices matter for habitat conversion, and several alternatives to conventional meat are 'hot' right now. But what protein source has the most promise for sustainability? Alexander 2017 has some answers. They look at a few categories: insects (crickets and mealworms), plant-based imitation meats (they looked at humble tofu rather than newer products like the 'bloody' impossible burger), cultured meat (real meat from animal cells grown in a lab), and aquaculture. Fig 1 has the results on efficiency - tofu came out on top (if you find it gross, let me know, preparation is key and rarely done right in the US), followed by bugs. Cultured meat didn't have much edge over pork and poultry. Table 2 then shows what the global impact on land use would be under different diet change scenarios (including odd ones like replacing 50% of current animal products with beef, doubling the ag footprint on earth). While insects came out as less efficient than plant foods, that could change if we found ways to use food waste for a significant portion of the insect feed.

Chaplin-Kramer 2015 asks how much it matters which lands get deforested in terms of impact on carbon storage and biodiversity. They look at two regions of Brazil and find where conversion happens affects its impact by a factor of 2-4, which conversion deep inside forests more harmful than nibbling away at the edges (although they note that their modelling scenarios use patterns different from what is typically seen in the real world). The discussion has some good points about how development of roads into new regions will likely have a higher impact than investment in infrastructure around existing agricultural lands.

Tyukavina et al 2017 has details on deforestation and forest degradation in the Brazilian Amazon since 2000. Figure 2A is my favorite - it conveys both the reduction in overall tree cover loss since a 2004 peak, and also the shift in what the land was cleared for. Pasture is consistently the biggest chunk, followed by swidden (small scale slash & burn) and then permanent croplands. There's lots of other interesting data here but that figure was the high point for me.

Wright et al 2017 uses a recent high-quality data set on conversion of natural habitat to / from farmland to show that there is a correlation between how much habitat was converted to farmland and how close the land is to the nearest ethanol refinery. While this study didn't correct for other factors, they point to another study which did and still found refinery proximity to be significant with conversion. The ability of refineries to stimulate conversion were highest where corn acreage was low to start. See http://wxpr.org/post/study-links-ethanol-production-habitat-destruction for a blog post aobut this one.

Kastens et al 2017 uses remote sensing data to look at conversion of forests in Brazil to soy farmland. The key finding is that the forest to soy conversion rate was cut in half after the 2006 soy moratorium. You can see the shift in Figure 5 by noting the change in the slope of the green line, but the abrupt difference right after the moratorium is more apparent in table 3.


AGRICULTURE (WATER QUALITY):
Hansen et al 2018 is a cool paper using empirical data to test how effective wetlands in the Minnesota River basin are at reducing nitrates in an ag landscape compared to cover crops and land retirement. They compared river water quality at ~200 sites under different flow conditions to high-resolution data on wetlands and land use to map correlations (they didn't get at true causation). They found wetlands were 5 times more effective per unit area at removing nitrates compared to cover crops and land retirement (although it's much harder to make a business case to a farmer around wetland creation). They also found wetlands strategically placed to intercept as much flow as possible were much more effective (see Fig 4 - the concept is obvious but the numbers are interesting). All these findings align well with prior work emphasizing the critical role of well-placed wetlands to improve water quality. If you read this paper watch out for the term "crop cover" (% of a given site area used to grow crops) as opposed to "cover crops" (presence of an additional crop on farmland that would otherwise be fallow for part of the year), as they're not super clear how they use the two terms.

Another potentially important tool to improve water quality can be controlled drainage aka "drainage water management" or DWM for short. The basic idea is that for cropland with 'tile drains' the nutrient-laden water can be stored and later reapplied to the field. Ross et al 2016 (led by several TNC colleagues) looked at both how effective DWM was on average in reducing the flow of water, N, and P from tile drained landscapes (they were all cut roughly in half), and identified what tended to make DWM work best. DWM performed better at higher fertilizer rates, when aggressively managed during the non-growing season, and there's a lot more evidence on N than P. Possible caveats: DWM can increase surface flow (and potentially erosion) as well as increase N2O by keeping fields wetter depending on how it's done.


GRAZING / SOIL CARBON:
Naverette 2016 (led by TNC's Diego Naverette) is another paper showing that we need different grazing strategies in temperate and tropical climates. There is considerable interest in temperate regions about the potential for high-intensity rotational grazing to improve soil carbon sequestration under some conditions. But this paper found in their study area (part of Colombia / Brazil / Peru), conversion from forest to grazing lands at intensities >1 head per ha led to soil carbon declining by 20% on average after 20 years, while conversion from forest to low-intensity grazing lands (<1 head / ha) actually led to a 40% increase! It's important to note rather than looking at individual pastures, the study looked at one "high intensity" region and one "low intensity region," so it's not controlling for soil type or other variables. Also note that the low intensity region includes a lot of abandoned pasture land which was regrowing with trees and shrubs, and questions of 'land sparing' by intensive grazing were not addressed. But this is useful baseline data we can use to evaluate the contribution of silvopastoral systems.

p.s. as a reminder, you can search all of the science articles written by TNC staff (that we know of) here http://www.conservationgateway.org/ConservationPlanning/ToolsData/sitepages/article-list.aspx
(as you publish please email science_pubs@tnc.org to help keep this resource current).
If you'd like to keep track of what I write as well as what I read, I always link to both my informal blog posts and my formal publications (plus these summaries) at http://sciencejon.blogspot.com/
Posted by Jon at 8:00 AM