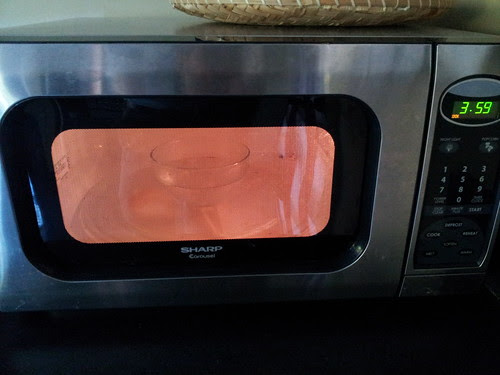 We have two microwaves in the kitchen at work, and while waiting for our food to heat up, there is always debate over how much faster one of them is. I also found myself wondering whether the faster one used more or less energy to produce the same amount of heat.

In order to test this, I used a Kill-a-watt meter to measure energy use, and timed how long it took in various microwaves to heat 12 oz of water from 66.5 F to boiling (measured by the appearance of bubbles on the top surface of the water), which should have taken 0.033 kWh. I was guessing that the microwaves listed as using more power would both heat it up faster, and use more energy.

Essentially, higher power microwaves tend to heat up water faster,but it's not a strong linear relationship. There's almost no relationship between energy use and heating time. Also, while in general higher power microwaves use more energy to perform the same task, that wasn't as clear as expected either. For the two microwaves on the 4th floor at work (the ones I use), the faster one of the two was only 10% faster but used roughly the same amount of energy. However, I should note that since the energy meter only reported use to the nearest 0.01 kWh, the precision for energy use is pretty low. I came up with a combined metric (seconds to heat the water times energy use) to give them points both for efficiency and speed, and there was quite a bit of variety there as well.