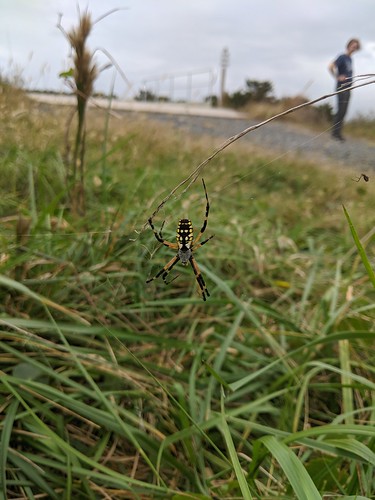 This month I'm focused on landscape ecology and climate change (yet again), and unfortunately not spiders or other spooky topics. I also have a webinar on research impact to plug, and a new paper out on the adoption of new practices. As always people can sign up for this newsletter at http://bit.ly/sciencejon

Are you a scientist who produces research that you want to have real-world impact? If so, I'll be hosting a session on December 3 (1p EST) with a series of recommendations from a paper that I have in review. You can learn more and register here: https://zoom.us/webinar/register/WN_Q78ubqH9TL6tkmLQCRyAsw and can read the draft paper at http://bit.ly/strongerscience


ORGANIZATIONAL LEARNING / BEHAVIOR CHANGE:
Reddy et al. 2019 (I'm a co-author) looked at the adoption of a new conservation planning framework (Conservation by Design 2.0) being rolled out by The Nature Conservancy. Some staff & teams were early adopters, but it was slow to spread. But people who worked on projects with early adopters from different teams were more likely to use the new practices. Having early adopters work with people from different teams who are slower to change can speed exposure to new ideas and help everyone to learn and adapt. Supervisors should encourage talent-sharing and learning exchanges so this happens more.


LANDSCAPE ECOLOGY:
Sawyer et al. 2019 looks at how which route animals take during migration impacts their survival. Their key finding was that both their choice of destination ("summer range") and how to get there had a big impact on survival. They found 'exterior' routes (near the edge of the migration corridor) had 30% lower survival compared to interior routes. However - look close at Figure 3 (red means high mortality risk, green low, blue medium). It appears to me that their finding may be an artifact of the fact that mortality is driven by specific destinations, and they didn't report this b/c of how they aggregated summer range boundaries. So it's unclear whether the risk comes from where they go or how they get there.

Tucker et al. 2018 uses GPS data from ~800 animals from 57 mammal species around the world (see Fig 1 for locations) to assess how animals move differently depending on how much humans have modified the landscape (e.g. through buildings, farms, lights, transit, etc.). Unsurprisingly they found more modified areas resulted in significantly less animal movement - especially over time periods of a day or more. They also compared species and confirmed that predators and larger animals tended to move farther, as did animals in resource-poor areas. No big shocks here, but an interesting read.

Tambosi et al. 2014 presents a method to identify priority areas that are highly likely to improve the ecological resilience of a landscape. They look for areas with intermediate resilience - meaning they have decent amounts of habitat and connectivity already, and through targeted restoration they could better connect more intact areas. They then apply this method to the Atlantic Forest in Brazil to identify ~15 million ha of priority areas to reforest (they don't report which subset of that is high vs low priority). It's a relatively simply graph theory approach to connectivity.


CLIMATE CHANGE:
Betts 2000 has a point that should be better known. He found boreal forests' ability to mitigate climate change is weak (and may even be negative). Dark needles (present year round) absorb a lot more infrared radiation than typically snow-covered ground. This reduction in albedo (diffuse reflectivity) reduces and in some cases outweighs the carbon sequestration. He compared forest to cropland, but didn't account for N2O emissions from fertilizer.

Li et al. 2015 compares the net impact of different kinds of forests on local weather, considering albedo and evapotranspiration. Their key finding is that "tropical forests have a strong cooling effect throughout the year; temperate forests show moderate cooling in summer and moderate warming in winter with net cooling annually; and boreal forests have strong warming in winter and moderate cooling in summer with net warming annually." This means that the net climatic effect (accounting for carbon sequestration as well as local weather) of tropical forests (and to a lesser extent, temperate forests) is stronger than indicated by carbon alone, while for boreal forests the carbon benefit is significantly offset.

Minx et al. 2018 is an overview from a 3-part series on negative emissions (which they define as reforestation, soil carbon, biochar, BECCS, DACCS, enhanced weathering & ocean alkalinization, and ocean fertilization). Table 2 summarizes potential impact and costs from various studies, and Fig 6 has a great visual synthesis of these data. They find afforestation, reforestation, and soil carbon as ready for large-scale deployment (albeit reversible), and all but ocean fertilization as having potential to deliver benefits by 2050. There are lots of other good insights here and it's worth reading.

Fuss et al. 2018 is a look at costs, potential, & side effects from a 3-part series on negative emissions (which they define as reforestation & afforestation, soil carbon, biochar, BECCS, DACCS, enhanced weathering & ocean alkalinization, and ocean fertilization). It has good details for each negative emissions option, but the most useful part for me was Figure 2, which shows the relative contribution needed from 'conventional abatement' (e.g. reducing fossil fuel emissions via clean energy & efficiency, and reducing land use change) vs 'negative emissions' over time.