OK, I promise this is the last "kitchen science" post for a while (and yes, I realize that this post is pretty weak science). There was just too much interesting data for me to resist giving it some proper space and discussion. The basic idea is that we had a wine and vegan cheese party (click the link for more details), and I thought it would be fun to collect some data.

I often hear vegans saying how various vegan cheeses are "just like the real thing," while non-vegans never seem to have the same perception. However, despite not thinking they are much like cheese, they still sometimes enjoy them on their own merit. My hypothesis was that vegans would have slightly higher flavor ratings, but much higher "cheesiness" ratings. I also thought that good flavor would only be weakly correlated with cheesiness (since something that isn't much like cheese could still be delicious).

Before I dive into the data, a quick side note. Modern cheese is generally made with pure cultures of starter bacteria: usually species from the Lactococcus and Lactobacillus (with many others used for certain kinds of cheeses). Since we didn't have access to these cultures, we simply used "rejuvelac," which is basically fermented sprouted grain (which tastes like a mix of foot stink and cheese soda). This mostly includes slightly different species of Lactobacillus (e.g. L. acidophilus) and some other bacterial genera. A really interesting experiment would be to make some of these recipes with pure cheese cultures and compare to the results you get with rejuvelac. Anyway, on to the data!

I created simple data sheets that asked each responded whether they were vegan or not (7 vegans and 6 non-vegans responded), whether they would eat any of the cheeses again (all 13 respondents said yes), and to rate each of twelve vegan cheeses on a scale from 1 (ugh) to 5 (meh) to 9 (wow!) for both taste and cheesiness. Note that if this was real science, tasting should have been done by individuals in isolation under controlled circumstances, rather than at a party. Perceptions will change based on what others think, the crackers used, the order eaten, portion size, and many other variables. But controlled experiments make for lousy parties, so we kept it informal.

We had 15 cheeses, but I only planned for 12 of them (guests brought the other 3) so only 12 were on the data sheet. As a result, there were not enough ratings of the other three to be analyzed, but I included the ratings on the full spreadsheet of results.

Overall, vegan and nonvegan ratings were much closer than expected. Across all cheeses, vegans assigned a mean flavor of 6.1 vs 6.0 for non-vegans. Vegans gave an average 5.2 on cheesiness vs. 4.9 for non-vegans (a bigger difference than for flavor, but still surprisingly close). However, I did note that the commercial cheeses were rated lower by non-vegans than vegans, as shown in the graphs below. Homemade cheeses were both rated higher, and were easier for vegans and non-vegans to agree on. 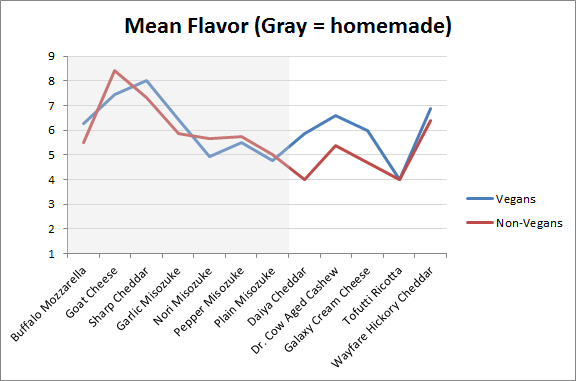 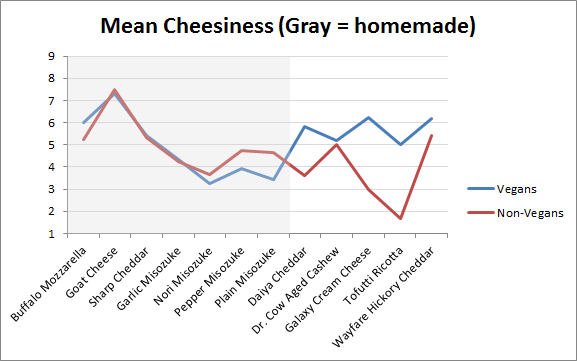 I was guessing that flavor wouldn't have much correlation to cheesiness, but they were better matched than I expected. It's hard to see much from the raw data (each person's rating of each cheese plotted individually): 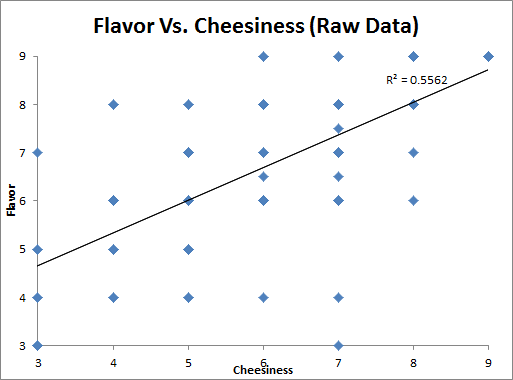 It is clear that there's a lot of variation, but that there is a general weak positive trend. This is a lot easier to see if you aggregate the ratings of flavor and cheesiness by cheese (so that there are only 12 data points): 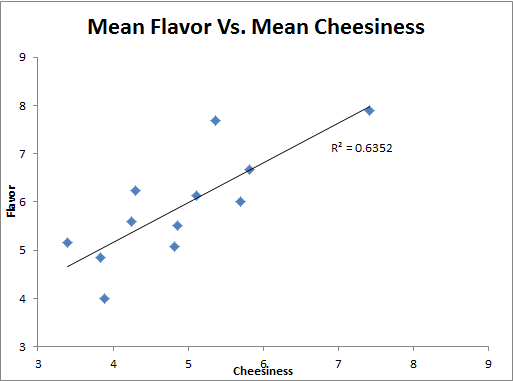 The R2 value is still not terribly high, but the fact that this is a linear relationship is a lot more clear here. While that suffices for testing the two hypotheses, naturally I was also curious about which cheeses were the most popular, and how much variation there was. The following two graphs show the mean flavor and cheesiness ratings (for all recipients), with error bars showing standard deviation. Note that a single respondent (my wife Sarah) doubled the standard deviation for the goat cheese (she was atypical in her strong dislike of it). 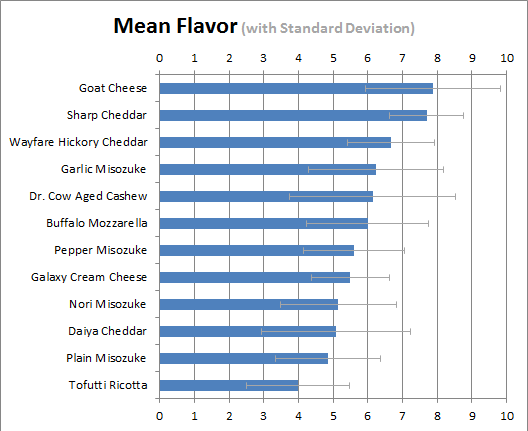 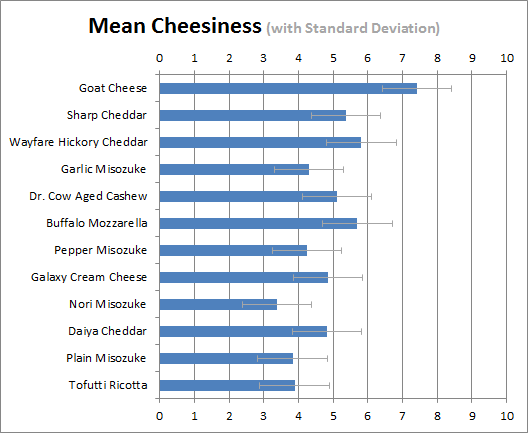 Then I realized that I also wanted to be able to show the full range responses, so I redid those two charts with the minimum and maximum ratings instead of standard deviation. Note that the two graphs above were redone to be more clear as an example for a workshop on good (and bad) chart design, but the following two were not. 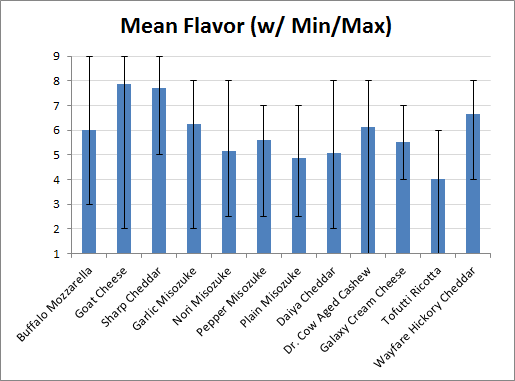 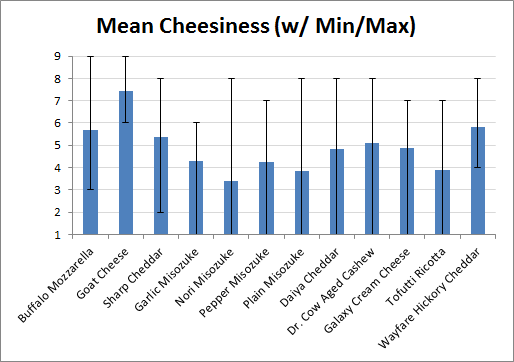 In particular I think it's interesting that only the Mozzarella and Goat Cheese received maximum scores for cheesiness (each got a nine from a vegan and another one from a non-vegan), and that there was a wider range of opinions on cheesiness than there was for flavor.

Still hungry for more breakdowns of the data? The full spreadsheet contains the raw data, the charts, and several other summaries not provided here. At some point, you just have to say "enough."
Posted by Jon at 10:56 PM 1 comment: Links to this post